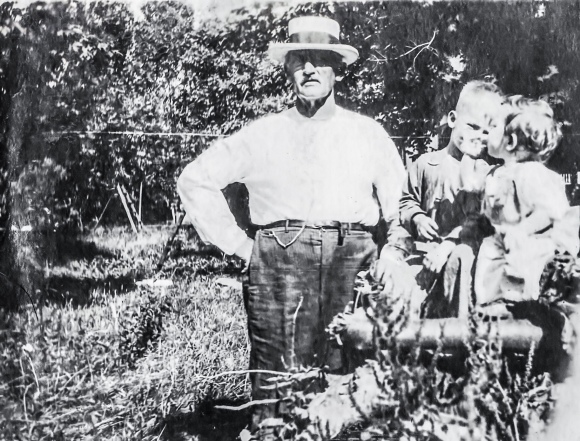 I know Edgar through photographs, grainy black and white images of a man who is never smiling. I know Edgar through his letters, loving messages of faith and encouragement he sent to his wife and children. It’s clear from his words that he had a deep contentment for the life God gave him. Even when voicing concern to one of his children, he reflected a strong faith that kept him anchored in choppy waters. I know Edgar from a place even though we never overlapped at this place. I have slept in the house he built out of devotion to his family of seven children. I have met Edgar but only indirectly.

Edgar is my mother’s paternal grandfather. He died on May 22, 1930, two years before my mother was born. He was 78. His widow, my great grandmother whom we called Nana, was 64. She would reach her 100th birthday, spending 36 years without her husband. My life overlapped with hers by seven years. I can remember sitting on her lap, a frail woman with a ready smile. She spent summers on the shores of Lake Michigan and so did we. I got to know Edgar through her and in this place that meant the most to him: a farmhouse on Lakeshore Drive in Fennville, Michigan.

When I was young the farmhouse was creepy. Nana was too old to take care of it in the last decade of her life. It went to her daughter, Stella. My great Aunt Stella was of meager financial means, a poor housekeeper and had increasingly dim eyesight. This was a prescription for decay in the home her father had built. When we walked up from our cottage to visit Aunt Stella she would open the creaky door onto the wrap-around porch and musty air would waft out from the front sitting room. It was always dark except for the parlor where she had a floor lamp with a glaring 200-watt lightbulb! I inherited this beautiful piece of home decor for my apartment in Chicago after Aunt Stella died. You know that stage when you accept any item of furniture that anyone will give you? I settled for a 100-watt bulb and that worked well for me.

In spite of the decrepit state of the farmhouse in my youth, I could imagine the glory days from my grandfather’s tales. He and his siblings labored to help their father with the chores. At the end of a sweaty workday, they raced down the bluff and bathed in the lake. An outhouse served the plumbing needs of the family for decades. Edgar built a barn that housed a sturdy mule and some chickens. There was a bowling alley built into the barn that kept Edgar’s seven children entertained. A clay tennis court was smoothed out of forest floor and this, too, became part of the family lore about glorious summers on the lakeshore. 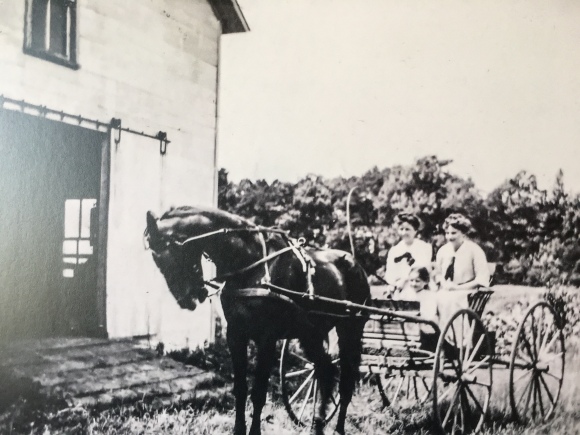 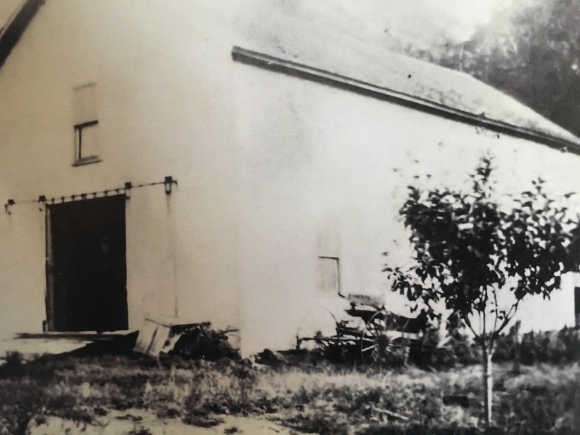 Edgar became real to me through his writings in a farmhouse log where he recorded his activity on their lakefront property at the turn of the 20th century. He and Nana built the home in 1896. They named it Kenwood after their neighborhood in Hyde Park, Chicago. He writes, “The district where we bought our home, 4343 Lake Pk was called ‘Kenwood’ where there were many churches, good schools and no saloons.” His penmanship was beautiful and his Christian values emerge readily from his entries. The details he gave in the log were precise: what varietals of grapes he purchased, how much chicken wire he bought to contain his brood, the Chicago-based company to whom he sold his strawberries. The real treasure was the journal entries he made in the spring as he first arrived at his beloved farmhouse. He described the process of preparing the earth for another fruitful season. Edgar always arrived at the farm a couple of months before the family. He came in the middle of March many times facing harsh weather conditions. He prepared the soil, ordered the plants, cleaned the barn and pruned the fruit trees. He always gave a commentary on the weather, the size of the beach, and social outings that included Sunday drives to visit his sister-in-law and her husband in downtown Saugatuck. He went to church and had nice conversations with his neighbor, a local doctor.

From November through March Edgar worked as a realtor in Chicago. But what he lived for was the spring thaw when he could leave the big city behind and head north to the property along the shores of Lake Michigan. A drive of only a couple of hours now, it would have been a significant journey at the turn of the century to cover those miles. But it became a beloved and familiar trek for generations of Edgar’s family over the decades. It was the place of family reunions with time shared between the gracious home and the beach. The family worked hard to do the chores that come with living on a farm. But they also knew how to take time for meals and tennis matches. There’s a picture I love of my grandfather and his brothers on the roof of the house. Who took the picture and what was the occasion? It captures the fullness of life that was lived in these 19th century walls. 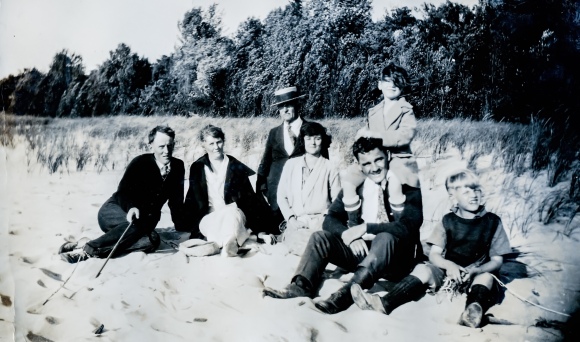 Edgar’s obituary is brief: “Edgar Tharpe [name misspelled] passed away at his lake shore home last Thursday. The funeral was held at the home at 10:30 o’clock Saturday a.m., Rev. F. H. Zerbe officiating. The body was taken to Chicago for services and burial. Mr. Tharpe, with his family, lived at their home on the lake shore summers for many years and made many friends in this locality. He is survived by the widow, two daughters, Mrs. Menard and Stella, three sons, Edgar, Gilbert and Russell.”

The last entry in the farmhouse log is from the Spring of 1929, one year before Edgar died in his beloved home. It paints such a lovely image of the contentment he felt arriving on the lakeshore each Spring that I will close with that:

“Apr.22 Friday the 19th it began to rain and kept on raining hard for 30 hours. Sunday morning the garden and orchard in front of the house was covered with water and the pond and woods clear over to bucks was like a good sized Lake and the road from our south line to Dr. Irwins corner was like a large ditch. At Dr. Irwins road the water ran past his barn to the gulley west of the barn and today the 22nd the road is still full of water and the road near Bucks is impassable being covered 18 in with water. Nothing like it has ever occurred before in the 29 years we have been on the farm. I have had plenty of wood and have kept warm. I drive East through the farm to Westvelds for supplies and Shep [his dog] and I have plenty to eat. E. H. Tharp.” (copied verbatim)

The man in the grainy black and white photos emerges from the shadows of the past in this journal entry. This weekend three generations will gather on the lakefront for “Cousin Camp”, the youngest of whom are five generations removed from our patriarch. Somehow I imagine Edgar looking in on this joyful chaos and smiling.