Just as Leicester is pronounced “Lester” and Worcester is pronounced “Woo-ster”, Haverhill locals don’t follow phonetic rules when it comes to their town name. Of course, these names were all borrowed from English towns and transplanted across the ocean. I’m not a local but my father was. Of the three towns that stretch along 26 miles in northeastern Massachusetts into New Hampshire, Haverhill is planted tenderly in my heart. I grew up knowing that we had roots in this New England hamlet. We knew to cheer for the Boston Red Sox. We begged my dad for stories about his childhood growing up in the back of a store. “Tell us about the robbery,” we pleaded. My mom rolled her eyes then smiled. That’s all it took for my dad to regurgitate the same details he had told us countless times before about his mother jumping over a back fence to summon help during the hold-up. Haverhill was a part of my childhood, even though I don’t remember ever traveling there when I was young.

Part of the intrigue of this place was that my grandparents lived there. My very proper grandmother lived with us a month of each year and tales of the fabled upbringing of her children inevitably were woven into dinnertime conversations. But I never knew my grandfather, Walter. There was an element of mystery about him since we never met him. But I felt like I knew him from the many accounts of family life in Haverhill. When my dad got together with his two siblings the room was filled to capacity with laughter. As they reminisced my grandmother smiled, not wanting to admit that she enjoyed their tales–but she clearly did! Walter was the one with a sense of humor and a love for words. He was frequently part of their memories and I somehow knew that I was meeting him in my dad and his siblings.

The Chapmans “lived in three rooms behind the store” that they operated for their community. I can’t tell you how many times I heard that description of their sparse living conditions. There was only one bedroom. My grandfather had a twin bed in his room. His two sons slept on bunk beds in the same room. Boy-Girl quarters. My grandfather was 20 years older than my grandmother so his needs for comfort perhaps trumped hers. Or maybe the boys got the bedroom because there were three of them and only two women. My grandmother and her daughter, my Aunt Flo, shared a day bed that opened up as a bed at night and folded up in the day so as to not take up space in their shared quarters. There was a kitchen with a table pushed up against the wall and four chairs around it. Five family members—four chairs. There wasn’t room for the table to be away from the wall, accommodating a fifth chair. There was a tiny bathroom with a toilet and small sink. No shower. No tub. My aunt described how she was given “privacy” in the communal kitchen each Saturday night to bathe in the kitchen sink. (Remember when folks took weekly baths?) There was a door by the sink that opened into the store the family ran. It had a glass window in it, threatening to blow her cover. So she hung a coke poster in the window so that she could strip down in their communal room, hoping desperately that no one would inadvertently violate her weekly “pampering”. She says she can picture that coke poster to this very day.

For my dad and his brother, I think their childhood was an adventure. They didn’t miss the lack of privacy. The front part of their building was a general store that offered solace to families whose babies needed milk or soap to wash behind the ears. They were open seven days a week. It was an outreach to their neighbors as much as it was about making a living. Since they couldn’t all fit around the dining room table in their private quarters, they sat at a table with two benches located in the store. It was wedged between the pastry counter and the ice cream freezer. Passing the mashed potatoes was often interrupted when Mrs. Miller had to be rung up at the cash register. My grandmother tried desperately to maintain a sense of decorum about their very public family life. She told a story about the pastor stopping over one evening as they were having supper. The bottle of milk was on the table and she wanted things to look more formal. She had been raised in a lovely home with good manners. So she slipped the jug under the table to spruce things up a bit. This made her feel better until one of her kids accidentally kicked it over. The ruse of fancy living was quickly dispelled as the puddle of milk traveled rapidly toward the pastor. Grammie would laugh in telling the story but the stress she carried raising a family of three children in tight quarters in the depression years was apparent. 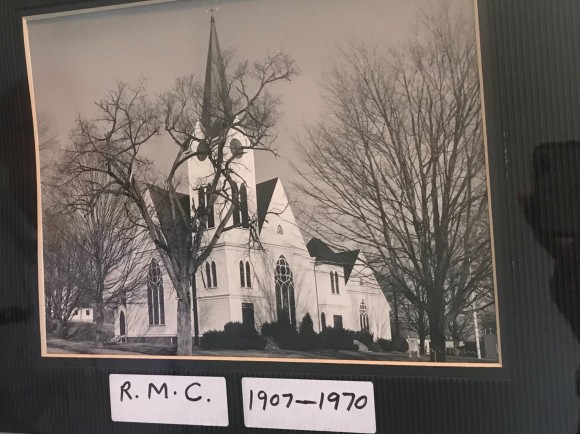 Just as the condensed floor plan limited their movement, so did the orbit of their life in the neighborhood. Right across the street from their general store was the Riverside Memorial Church. Eight of us descendants had the privilege of worshiping there in August (my cousin Lauren Littauer Briggs and her husband Randy, my sister Michelle and four nieces and nephews)! It’s been beautifully modernized and hosts a vibrant congregation. 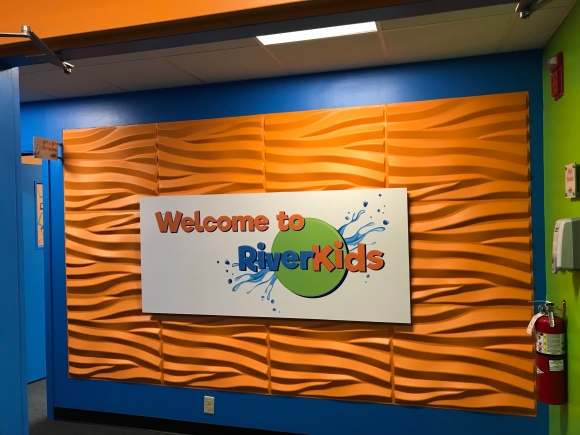 This spiritual home was a fixture in their weekly activities. Each Sunday they sat in pews with the same people they had served during the week. They derived strength as they sang together, “Great is Thy Faithfulness”!  They prayed for relief from times that were tough for a nation and rejoiced in God’s simple gifts that outweighed their trials. Katie and Walter anchored their family life in the Christian faith. Christ’s emphasis on mission outreach was behind the question they asked their customers at the Riverside Variety Store: How can I help you?

It was a tightly-knit community that affirmed the gifts of the three Chapman kids. Florence headed to college and returned to Haverhill to teach in the high school. When Fred Littauer proposed to her she turned the wedding into a class project! Her students helped to plan the service and took an active role in shaping the day of her dreams. It was such a creative endeavor that LIFE Magazine covered the occasion, showing off Riverside Memorial Church and the townsfolk in a generous feature article. Florence became a Christian speaker who traveled the world, inspiring thousands through both her written and spoken words. My father, Jim, played lead roles in Haverhill High dramas. He sang in church and majored in music at the University of Massachusetts. The faith imparted to him at the church across the street from his modest upbringing went deep. He attended Oberlin School of Theology and came home to Haverhill to be ordained. Over 500 people crowded into the church to hallow this rite of passage. He and my mother traveled the world with the six of us kids while my dad served as a Chaplain in the U.S. Air Force. Ron enlisted in the Army and was given the job that suited him best: radio broadcaster for the U.S. Army in Korea! He became a beloved D.J. in Dallas for over 50 years and was inducted into the National Association of Broadcasters Hall of Fame in 2010.

Katie and Walter Chapman, whose family life was squeezed into three small rooms behind their store, could not have guessed how their love, Christian faith and sense of humor would catapult their three children into the far reaches of the world. Walter won an essay contest with a letter he sent to Senator Henry Cabot Lodge. It was a political piece and his love for words was affirmed. He passed this on to his children, all of whom thrived in careers that gave them a voice. When they visited together when I was a girl, you couldn’t shut them up! And that was a good thing! My grandfather died at age 70, leaving my grandmother behind as a widow at age 50. He wasn’t able to see how he shaped three remarkable individuals who continued to ask folks in different ways, “How can I help you.” 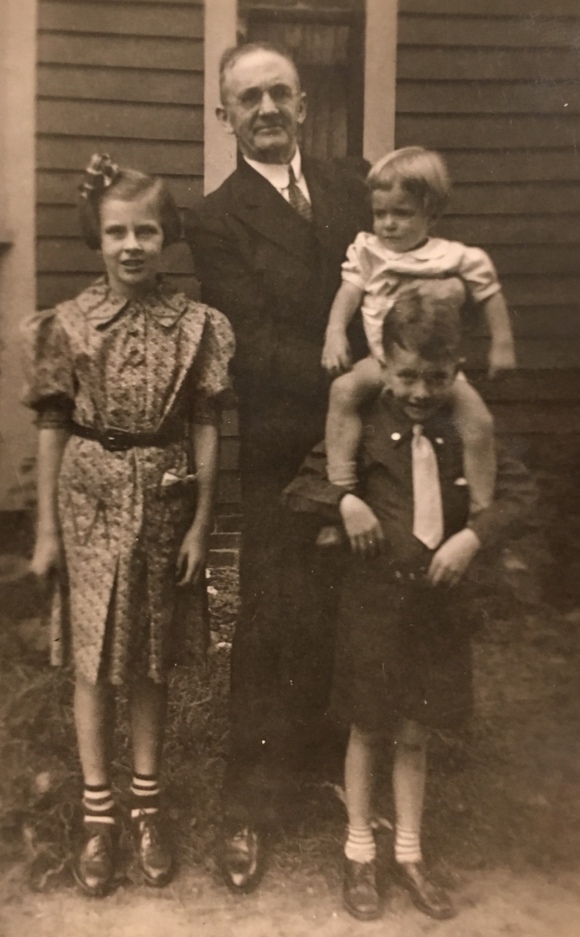 Walter had few possessions but I found a few poems cut out of newspapers that have his name marked next to them. My eye was drawn to one entitled, Only a Dad, by Concord Monitor. My grandfather had lost a baby sister and mother when he was 14. He and his 10-year old brother had been left in a  boarding house by their father, whose work required him to travel to provide for his boys. Walter learned early on that he had to work hard to provide for himself. I think that may be part of the reason for why he didn’t marry until he was 47 years old. Making up for lost time when he found the woman he loved, they raised three joyful, eloquent, faith-filled children who would use their ample gifts for good in the world around them. You’ll see in the picture below where my grandfather wrote the word, “Amen” in the margin. He wasn’t able to provide the kind of financial life for his family that he would have liked. But I think those three loquacious kids would agree that he—and my grandmother—gave them all they ever needed!