My roots exploration in Europe this summer extended far beyond genetics and hometowns. I learned the egotistical ways of my British ancestors. The Debbie-Downer of a preacher in Ecclesiastes cries out, “Vanity of vanities, says the Preacher, the son of David, king in Jerusalem. Vanity of vanities, says the Preacher, vanity of vanities! All is vanity!” (I think he might lose some points in an English class for repetition!) My people, it turns out are vain. Because I’m an outsider, I find their flaunting to be fascinating. Foreign eccentricity is amusing! Just don’t laugh at my efforts at self-promotion. That’s serious business!

The first discovery about British vanity is found in a fashion statement for which they are known: the women’s headpieces. At any grand English occasion, the women parade all forms of hats that put the Who’s in Whoville to shame. One sister had her mind set on super-special sister pics with ancestral headgear augmenting our otherwise bland features. She let us in on this dream one morning when we awakened in Leeds, England. We were to use our morning to shop for fascinators. “For what?” I queried. The hats our English lady-friends wear that so fascinate us are, precisely that, fascinators. Since there was an impressive shopping area nearby we set out—four unadorned American sisters—to find the perfect statement for our…heads!

It turns out that fashion isn’t cheap across the pond any more than it is here. We found a grand selection of fascinators pretty quickly but discovered that one sister’s whimsy was going to cost us each about $30. We tried another department store—more like a T.J.Maxx of Britain. Less selection and similar prices. At this point we had each tried on several different styles and bought into the fascinator vision of my sister. When paying for mine the woman asked me if I had a special occasion coming up for which I would debut my purchase. “No, it’s just for frivolity!” I responded. “We love frivolity,” she replied enthusiastically. Clearly. When a nation of women park feathers and flowers atop their coiffed hair, frivolity is at play. Or, to phrase it as our dour forebear in the faith intoned, “I said to myself, ‘Come now, I will make a test of pleasure; enjoy yourself.’ But again, this also was vanity.” Nice way to kill the party.

We did, by the way, get a lot of mileage out of these luxury items. Not only did we get some great photographs of four silly sisters claiming their roots in England. We wore them in several places which gave some light-hearted pleasure to our ancestral people. For the people who birthed Monty Python, it is no small credit to make them laugh! Both in London and Edinburgh, while we were there, the Queen held her annual tea. At these grand occasions that host thousands, she thanked ordinary citizens for their selfless contributions to the wellbeing of their communities. We were at the right place at the right time and had an opportunity to see a vast array of netting, feathers, twirlies and sparkles accenting hats the women wore to those ceremonies. In Edinburgh we were having a late lunch at a pub on the main drag of old-town Edinburgh when a throng of lovely ladies, accompanied by their handsome kilt-wearing princes, came in for a celebratory drink. We had front-row seats to a fantastic British fashion show! 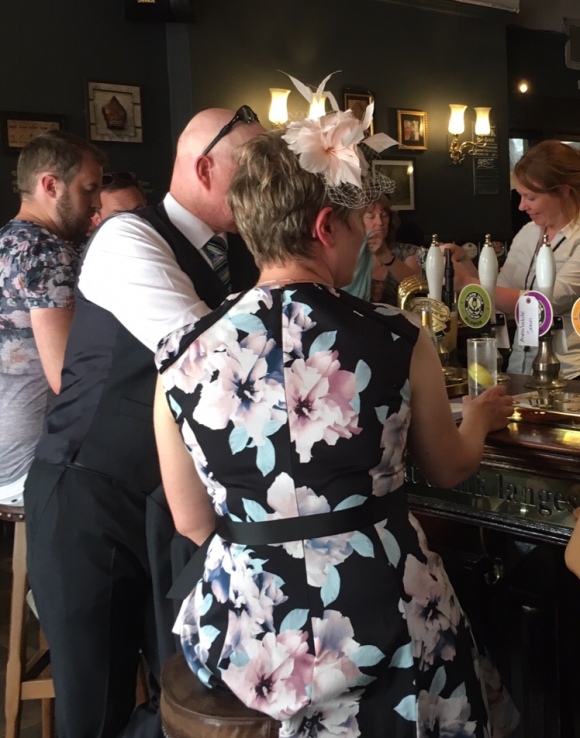 We discovered a variation to the vanity theme of our kin in Scotland. We hired a chauffeur to drive us through the Highlands, from Edinburgh to Oban, on a beautiful day. He was a retired police officer and knew his history and the back roads. Our efforts at driving ourselves through England on the wrong side of the road were met with fear and trembling. So it was great to be able to look out the windows of his comfortable van at the breath-taking scenery. Many of the hills in Scotland are “smooth”, lacking trees. I understand this is because of the high winds and rocky soil. So we noticed several times that there were interesting towers or monuments atop some of the hills. We commented to each other on how striking they were and wondered aloud what purpose they served. That was enough for our driver to offer a spontaneous editorial.

“We call those ‘follies’” he stated. “That one up there was erected by the family that owns the surrounding property. They do it to bring attention to themselves.” In case we weren’t picking up on his derogatory drift, he stated that they served no purpose and were an expression of conceit. Our admiration, of necessity, drained but we watched for other follies along the way. The most impressive one we saw was in Oban, the hometown of our MacDougall clan. It is perched on the highest point in the city, a virtual coliseum that commands attention. It was the mother of all follies and we were entitled to take some ownership of it as proud Oban clanspeople!

It was built by John Stuart McCaig, a wealthy banker, at an estimated half million dollars in today’s value. He had a vision for it, designed it and spent five years building it right up until his death in 1902. An admirer of Roman and Greek architecture, he wanted to leave a lasting monument to his family. His death cut short his grandiose plans for the full development of the site. He had intended to erect a tower in the center of the coliseum—what says ego more than a prominent and useless tower? Even better, he intended to use his substantial financial means to commission statues of himself, his siblings and their parents to populate the interior of the monument. His death at age 78 left the project incomplete, with simply the outer walls in place. There is a bit of nobility to this effort: he hired stonemasons to do the construction so that they would have work in the winter. Even vanity has room for benevolence. 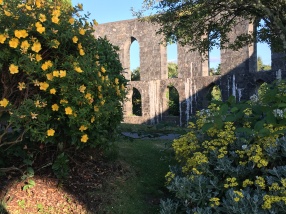 Our melancholic preacher from Ecclesiastes would stand unimpressed before McCaig’s tower and other follies around Scotland. In his usual cheery way he preaches, “Is there anything of which one can say,’Look! This is something new’? It was here already, long ago; it was here before our time. No one remembers the former generations, and even those yet to come will not be remembered by those who follow them.” Take that, John McCaig! My sisters and I actually enjoyed walking up a steep hill through a neighborhood of homes to investigate the folly. A young couple sat at a bench within the stone walls, enjoying the scenery as a host site for their amorous expressions. Other tourists walked around the impressive structure and appreciated the grand vista of Oban-on-the-Sea afforded by the aerial view McCaig obviously appreciated.

So we stumble onto the timeless truth that what is fashion to one is folly to another. A monument built of egotistical desire can nonetheless be a source of inspiration to generations yet to come. The reality is we all greet each day with a narrow view from our own subjective window. We find ways to enhance the gifts that God has given us and to conceal the blemishes that cause us shame. Folly to one is beauty to another. The sooner we admit that we’re all in this egotistical mess together, the sooner we will appreciate the fascinating gifts that the other has to offer–not with judgment but with pleasure. Acknowledging our own tendency toward self-promotion, we turn to the God of our preacher friend in Ecclesiastes and affirm: “I know that whatever God does endures forever; nothing can be added to it, nor anything taken from it; God has done this, so that all should stand in awe before him.” Amen!