I should have paid closer attention to the sad state of my slip. But I had a lot going on and didn’t have time to evaluate whether it was going to serve me well or not. I knew the thin elastic at the waist was slack. It had survived a couple pregnancies. The fact that I was pregnant again meant that a saggy drawstring worked in my favor. It had stretched out before—it could do it one more time. Why spend my hard-earned money before I had to? I would push this piece of shabby lingerie to the limit and then consider replacing it with something both effectual and appealing after the baby was born.
For those of you 40 years or younger, here’s the definition of a slip! You can find it in the lingerie department:
Slip [slip] NOUN
1. a woman’s loose-fitting, dress- or skirt-length undergarment, suspended by shoulder straps (full slip) or by an elasticized waistband (half slip).
“a silk slip”
synonyms:
underskirt · petticoat · underslip · half-slip

The morning of a grand church celebration I put it on under a long skirt and jumped in the car to face a demanding day. The congregation I had been called to serve just seven months earlier was marking its sesquicentennial. On that particular Sunday a reporter from the local paper was going to be part of our celebration so as to write a feature article on us. This was a big deal! We pulled out the stops that morning, including special music, a review of our congregational history, a recognition of long-time members and extra involvement of our children. As I led the worship I was awed by the fact that we were marking 150 years of history—and I was praying that my slip, which seemed less reliable than ever that morning, would behave. Not only was the elastic shot but I had noticed that the side seam was slowly unraveling. A simple rectangle of lightweight fabric, it was gathered at the waist and sewn up the one side. But, starting at the bottom of the garment, it was literally coming apart at the seam with slow determination. Again, I slipped up. I should have gone without it or splurged on a new one for $20. But I had faith that it would last through my pregnancy—and I was cheap! So my thoughts were divided between heavenly glory and earthly shame in that celebrative worship service! 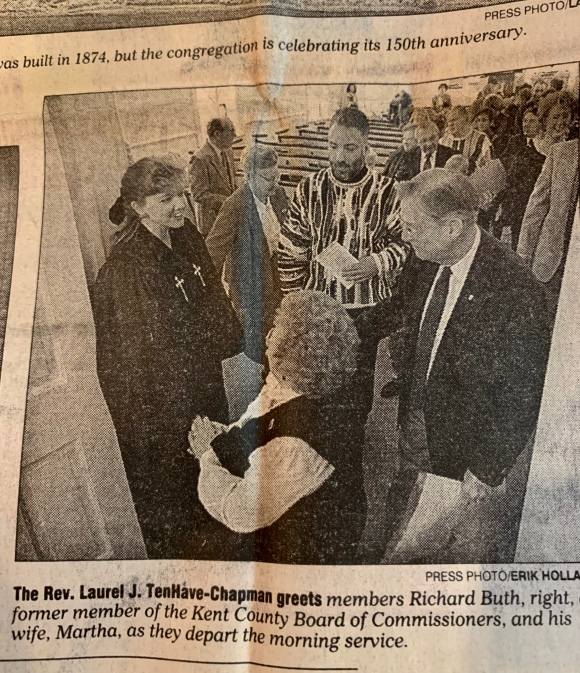 There’s a photograph of me in the newspaper article greeting folks at the back of the sanctuary. I’m wearing my clerical robe which I remember being reassuring to me. If my slip slipped down a bit, my long robe would hide that until I got into the privacy of my office after all the fanfare. I dodged embarrassment at the coffee hour, eating cake on colored paper plates with side servings of mints and nuts. I had good conversation with the reporter with no unintentional self-revelation. As the morning festivities wrapped up, my husband and I tore out of there with our three young children to our home 25 minutes away.
The first year I served the church, our home in Grand Rapids was on the market. We were trying to sell it by-owner so every morning I left the house in tip-top shape, in case a prospective buyer stopped by. I drove my children 25 minutes each morning to their school in our new hometown, dropping them off in front of their building then making my way to my office. To test the goodwill of the congregation who went out on a giant limb by entrusting the pastor position to a woman, I became pregnant in the first six months of my tenure with our fourth child! Things in our life were stretched thin—including, it turns out, the undergarments that guarded my modesty! That sesquicentennial Sunday we raced home to feed our kids something gourmet, like mac and cheese with hotdogs, and put out the sign for an open house. Since we were our own realtors, we broke common protocol in the house-selling business, and were in the home as the first people arrived.
I assure you that my mind was still partly attuned to the vulnerability of my slip. But I hadn’t had a moment to myself. So, as I washed the dishes and gave a final wipe to the lunch table, I noticed my slip hanging below my mid-calf skirt. Uh-oh. Resolving to disappear into my room to change before the anticipated throng of interested buyers appeared, I heard my husband greet people at the door. I yanked up the slip and said a prayer. Trying to look relaxed and give the message that life in this home fostered tranquility, I put items on the kitchen counter in final order.
The slip slipped further. A pleasant couple came into the kitchen so I tried to inconspicuously hold on to the side of my skirt, gripping through it to the slip below. After some pleasantries they drifted down the hallway so I let go of my grip of shame. Apparently my clutching did final damage as the garment dropped to the ground, a useless rectangle. The side seam was undone and the elastic kaput. As I surveyed the damage, I heard the couple coming back into the kitchen. I picked up the slip at my feet, as if I had dropped a kitchen towel. I wiped my hands on it while answering their questions. The moment they left the room I shoved it in the trash can under the sink with a final farewell.

Sometimes the high points in our lives are marked by humbling mishaps. When I see the picture of me greeting the faithful at the end of our worship celebration, I know that a part of my mind was on maintaining my dignity. I slipped up! I should have invested in a new slip before it literally fell off of me! But what kind of story would that make? It seemed to be a strangely fitting reminder of the humanity of hard-working folks for 150 years in our congregation. Our dignity does not stem from our physical traits or outward appearance. It is nothing we do that brings us glory. The good news we celebrate is that God chooses us, redeems our goofy moments and smooths things out when we slip up! Hallelujah!