Her sight had grown dim. There was much she could no longer do. Her children had families of their own and were busily chasing after games and lessons and church activities. Her world had narrowed along with the lost ability of her senses. But she wasn’t lonely. She never felt alone. Sitting in her chair she turned on a lamp and turned on her tape recorder. Her son picked up Books-on-tape for her and she was working her way through the Bible. These were words that had nourished her as a girl in a little congregation in a small town. At the opposite end of her life they spoke to her again, with a world of experiences behind her. Relaxing in the warmth of the lamp, she listened to a deep voice that started in where she left off the night before: In the beginning was the Word, and the Word was with God, and the Word was God…All things came into being through him…What has come into being in him was life, and the life was the light of all people. The light shines in the darkness, and the darkness did not overcome it.” Her feelings of loneliness faded as she basked in the presence of her faithful God.

A man sits in prison for embezzling funds from his church. He hadn’t meant any harm. Medical bills had piled up so he thought he would borrow from the church fund until he could repay it. But his financial life didn’t turn around and his debt silently grew. Now he sat as a former church treasurer, eating with people he would have never associated with before. He felt abandoned by his church family. Understandably, they were angry at his betrayal. His desperate circumstances didn’t excuse the theft. God felt very distant from him. It was Christmas and there was none of the usual signs in this locked-up facility to remind him of God’s gift to the world of Jesus. On Christmas Eve he attended a worship service led by a pastor who was weary, who had already led worship in his own parish and had a family waiting for him at home. But he knew God had called him to minister to these men behind bars, to offer a glimmer of hope to those who had given up on their Maker. During that service in a dreary environment, devoid of wreathes or choirs or light shining through the stained glass windows, the preacher invited the former church treasurer to come forward and light the white candle in the advent wreath, the only familiar link to his past. As he lit the Christ candle and the men joined in singing, “O Little Town of Bethlehem” God parted the darkness of his soul and he remembered the baby born in a manger long ago. Somehow, he knew that Emmanuel had been born for him in that place. “A light shines in the darkness, and the darkness did not overcome it.”

A woman had given up on finding the right man. She had dated more men than she had ever imagined she would. How could it be so difficult to find the right person? She felt like God had failed her. Everyone else seemed to find their mate but she remained single, date-less for social occasions. Not far from her a man prayed that God would lead him to a woman who would complete his life, who would bring greater joy. It was a prayer he hadn’t dared to offer for a long time. He had given up some years before on finding someone who would add deeper meaning to his days. Then it happened, in an instant, as if by Divine appointment, they ran into each other, their eyes met, their hearts connected and the man shared with her the prayer he had offered not long before. God had given them into each other’s care and they could not have had a better matchmaker. Her feelings of estrangement toward God seemed far away from her as they took two candles representing their individual lives and lit a unity candle in a sacred service. She could pray again to a God who remembered her. “A light shines in the darkness and the darkness could not overcome it.”

It was crushing to learn that they could not have children. Those early conversations in their marriage about baby names and whose side of the family their children might resemble had long since ceased. Not only had they stopped talking with God. Their conversation with each other became strained. Other areas to their married life seemed less important as their desire for children grew and was unmet. A neighbor who went to the church down the street suggested they connect with a Christian adoption agency in town. It wasn’t what they had ever envisioned but something about the neighbor’s kind words gave them hope, shifted their expectations and led them to make a trip in their car that they never would have predicted. Reams of paperwork and months later, they tuck infant twins in at night, standing together at the sides of their cribs, cooing to them. As they leave the room, they turn on a nightlight that is perhaps more comforting for them as new parents than it is for these blessed babies. The couple is exhausted but deeply contented. God had answered the prayers of their heart and they were grateful. “A light shines in the darkness, and the darkness did not overcome it.” 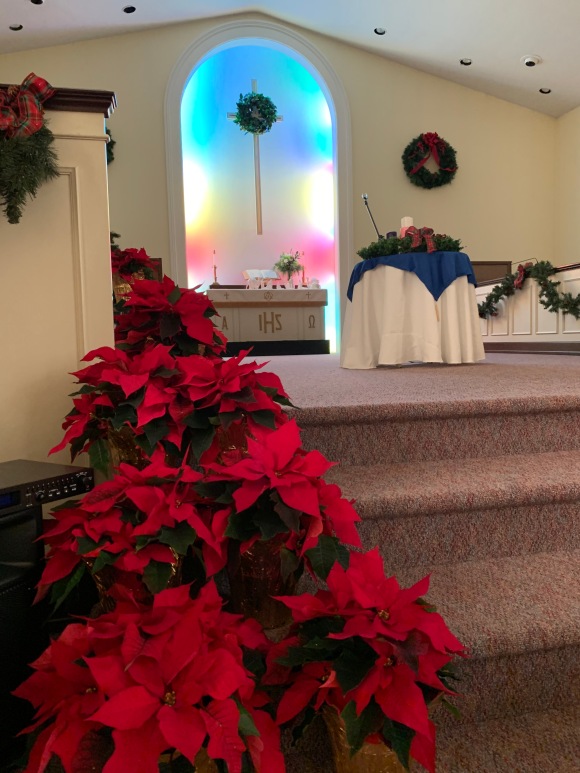 He sat in the pews on Christmas Eve. It was his first Christmas since his divorce and his children were with his ex-wife. How do you celebrate Christmas without your family, he wondered? He felt empty, caught up in his grief. As the service began children, with eyes filled with Christmas Eve anticipation, walked forward with their acolyte robes askew to light the candles on the altar. As they stretched to reach those candles that set holy time apart from regular time, he knew that Jesus was Emmanuel, God with us. He somehow knew that he would make it through this painful transition because the God he had served in his youth, in his marriage and with his children, would be with him. “A light shines in the darkness, and the darkness did not overcome it.”

She had lost her job. She had lost her home. She was at the lowest point she could be, living in a motel and wondering how to make ends meet. Her 2-room lodging was dimly lit with a lumpy bed and stained linens. She passed neighbors in the hall who seemed as depressed as she. Certainly God didn’t live here, in this space that she could have never foreseen, couldn’t imagine enduring. But time moved on and folks helped her at the North Kent Connect. There was a job posting that was perfect for her. Though pessimistic after an interview, she got the call. The job was hers. She saved her hard-earned income and was able to buy a small house for herself. One night she turned on the porch lights so that friends from her new church would know what house was hers as they came for a visit. Her space now was clean; it was bright; it was hers. God had dropped into her life in an amazing way and led her from the wilderness to home. Watching out her front window for her guests to arrive, she was filled with joy. “The light shines in the darkness, and the darkness did not overcome it.”

A storm ripped through their town, tearing homes apart. In an instant, a community was decimated. One man looked out on a mangled tree in his front yard with siding from his house that had blown out into the street. No one had power in the wake of the storm and they wandered out into their neighborhoods, dazed, assessing the damage. “Why me?” the man mused to himself.  “Where’s God in this disaster?” he thought bitterly. A local church met the next day in their parking lot, with remnants of their beautiful sanctuary strewn about them. They worshiped and mobilized to go into the surrounding neighborhoods and make sure people had the help they needed. Two church members knocked on the door of the man who had decided against God. They had chain saws that spoke more loudly at that moment than any Bible could. Their smiles in the face of their own losses unsettled this man. How could they have joy when they, too, had lost their homes? Their enthusiasm for helping others helped to melt his anger. They invited him to join them in their outreach. They invited him to join them for their outdoor worship service the next week. As they stood in that parking lot, with former pews and shards of stained glass swept up into neat piles in anticipation of a future sanctuary, their joy penetrated into the resentful heart of this empty man. Jesus moved into that empty space and filled it with hymns of praise. When the power was restored nearly two weeks later, the light of his home shone forth in a restored home and restored heart. He was a new creation, as was his community. “A light shines in the darkness, and the darkness could not overcome it.” 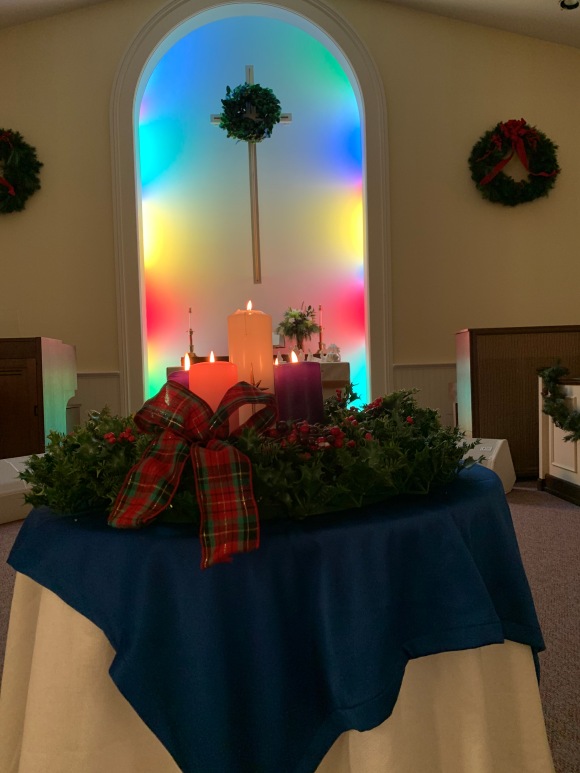 Emmanuel is born on this Holy Night. He is the only answer to all our questions. He is the One in whom we find our true selves. Jesus will restore meaningful life to us. It is His light that will dispel all darkness and bring us to our knees in praise. Tonight we sing praises to Jesus Christ, the newborn King, who has overcome the darkness of the world. Thanks be to God! Amen.