A friend posted on facebook that she didn’t let her class of second graders know it was her birthday until that very morning as they arrived at school. So, rather than a coordinated effort by caring room mothers who referenced Pinterest for the best possible teacher gift, her young students were on their own to plan something special. The result? An impromptu and clandestine collection was taken which garnered $1.46 in sweet pocket change that she could use for a coffee. And someone offered a paper ninja star.
Priceless.
What’s the most memorable gift that a child has offered you? Was it a pasta necklace or paper plate hat that you wore with pride? Teachers are loaded with stories about the incredible kindness of our youngest citizens! Maybe they should lead in some of our international diplomacy challenges?!
We read four verses in our worship today from Isaiah 11: 6The wolf will live with the lamb, the leopard will lie down with the goat, the calf and the lion and the yearling together; and a little child will lead them. 7The cow will feed with the bear, their young will lie down together, and the lion will eat straw like the ox. 8The infant will play near the cobra’s den, and the young child will put its hand into the viper’s nest. 9They will neither harm nor destroy on all my holy mountain, for the earth will be filled with the knowledge of the LORD as the waters cover the sea.

These verses are nestled in a larger passage that introduces God’s Savior. He will emerge as a young shoot out of a seemingly dead stump. It’s a family tree and goes back to Jesse, King David’s father. This new sprout will grow into a ruler whose leadership will shape a very different world. Natural enemies will live side by side peacefully. Reconciliation will happen between people, animals and the land. Children will sit by the nest of poisonous snakes playing happily, the parents unconcerned for their safety. Part of the folklore in my husband’s childhood is the time a rattlesnake slithered toward him when he was a toddler. His father leapt into action and heroically killed the snake with a shovel. These images of predators sunning themselves next to prey on God’s Holy Mountain are not natural! They kick up fears within us. But God is the author of this restored Creation so anything is possible! 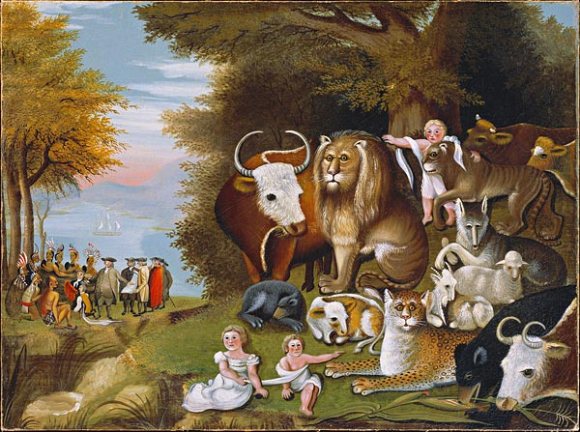 Edward Hicks was a Quaker pastor who repressed his artistic talents for many years to honor the aesthetic austerity of his faith. But his love for capturing the beauty of this world with paints ultimately prevailed. He was so drawn to the Biblical image of paradise from Isaiah 11 that he painted it with the title, The Peaceable Kingdom. He did at least 62 variations of the same scene, always including the animals along with a child. But he changed up the people to portray the divisions of his time. In one of the paintings the background depicted Native Americans signing a peace treaty with William Penn. In another a delegation of Quakers are talking respectfully with Native Americans. Hicks sought to translate the radical nature of Isaiah’s vision into the terms his world would understand.
As Christians we understand this passage as a foreshadowing of Jesus. In His ministry we see barriers broken down between enemy groups. He rebuked his disciples when they tried to keep parents from bogging down His ministry by bringing their children to Him. He immediately availed Himself to these smallest followers, the text telling us that He took them in His arms and blessed them. He ate meals with IRS men and didn’t shy away from physical contact with lepers, the Corona Virus victims of His day. Women held important roles in His movement and children were identified as role models for getting into the Kingdom. The prophet’s vision of God’s Holy Mountain is fulfilled in full color with Jesus’ ministry.

We count ourselves as blest to have so many children in our church family. We love their wisdom and their reverence. Their capacity to understand spiritual truths surpasses ours many times. They haven’t yet developed a rational mind that gets in the way of accepting seemingly impossible realities by faith. A few examples come to my mind.
When I served at East Congregational Church on the east side of Grand Rapids, my second-grade daughter’s class visited the church for a tour one day. The church was within walking distance of the school. The sanctuary has a gothic design with high ceilings and stunning stained glass windows. The students’ reactions to this sacred space was to offer some ooohs and ahhs and then to get quiet. They had a natural inclination toward reverence in a holy setting! One little boy ran his fingers across one of the window of deep blue hues and murmured, “I’ll never wash my hand again!”

God is the One who ushers in the Peaceable Kingdom—but we are called to sacrifice from our well-being and set out the stepping stones of faith to point the Way!
When we worshiped at Temple Emmanuel with the Confirmation Class in January there was a beautiful prayer from their book of worship that we prayed together, Jews and Christians, young and old, men and women. I’ll close with those words now, in English, not Hebrew!