I don’t remember why I went into our garden shed that day. A rider mower fills the bulk of the space while various and sundry outdoor items have been dumped there over the years…like, 22 years! So I opened the shed door to accomplish some outdoor task and was drawn into the chaos. When I see a mess my mind spirals out of control, determining what needs to be done and in what order. It’s really a curse! It is very difficult for me to concentrate when my surroundings are in disarray. Sometimes that leads to immediate cleaning action. However, if it’s an area that really isn’t under my control, I walk away. On this particular day in May, wearing flip flops and running shorts, my organizational self was drawn into this neglected part of our real estate. 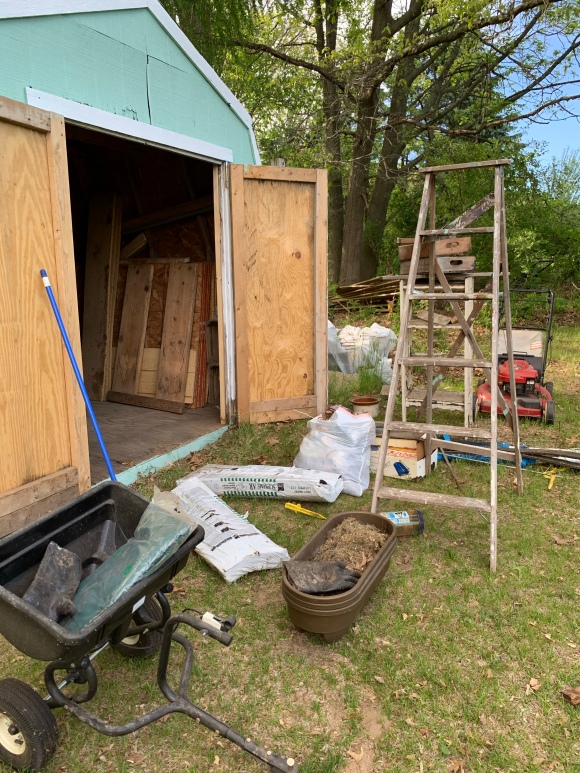 We made this shed out of a pre-fab kit when my now-22-year-old daughter was a newborn. I’ve never cleaned it. Out of sight, out of mind. As I gave a critical look into the nooks and crannies of this 10’ by 12’ structure, I could see that mice have lived handsomely in this space. I had an old wooden crate used to carry Faygo pop bottles. It could have looked quaint on a front porch with flowers in each square. But it sat unused in the shed for more than two decades. It was, in fact, the perfect mouse hotel. Private rooms for all! So that had to be set aside for the burn pile. Acorn shells were jammed into corners and dried oak leaves made for a soft bed. I went to our garage to find a broom and trash bag. Old paint and building supplies were used by the hibernating residents. Crummy shelving units gave even more surfaces for mice to set up shop. 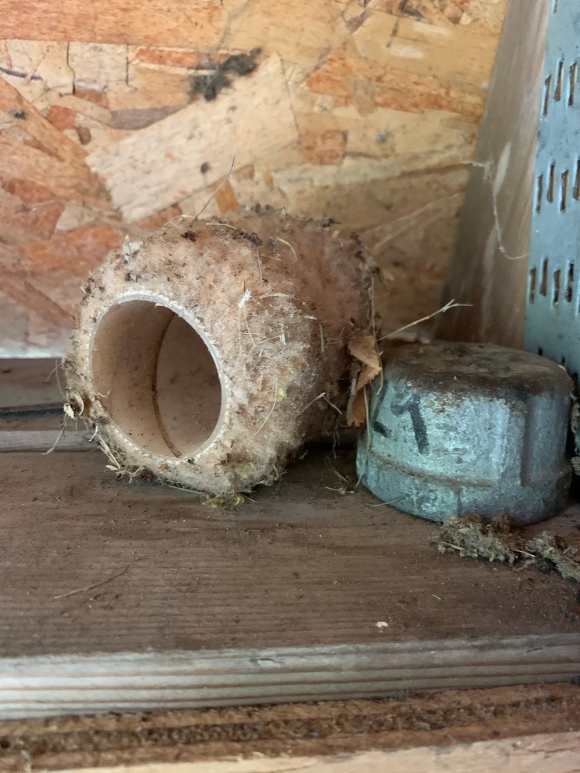 Something caught my eye as I dug around in the stuff along the edges of the shed. It was a painted canvas. I remembered it well. Entitled “Church in Storm”, it was an original given to my husband and me when we married 35 years ago. We were married in the Graham Taylor Chapel of the Chicago Theological Seminary where we met and earned our Masters of Divinity degrees. Folks started arriving for the July 7 wedding on July 5, checking into the Hyde Park Hilton. On the evening of the 5th a group of us went out for Chicago-style stuffed crust pizza then reconvened in the Commons of the seminary administrative building. There were some family members and a few friends so we opened gifts in this dark-paneled space. Seminary draws a unique collection of people, perhaps as a reminder that those called to serve the world in Jesus’ name will be regarded as “fools” or “clowns.” So our friend group from seminary was beautifully varied and one individual was with us that night. He set up an easel in a corner of the room and covered an apparent work of art with a sheet. There was to be a grand unveiling of his gift to us! With bated breath, our parents and siblings watched as the sheet was pulled off ceremonially. We all looked at the abstract lines that boast a finger painting style. I don’t remember too many comments in response to the artwork. The fellow-student-turned-artist gave a snort and announced, “I call it ‘Church in Storm’!”

It never did hang in our home. At some point it ended up in our shed and, therefore, survived our house fire that claimed all the art we did have hanging on our walls. It remained hidden from view, in all its glory, in a mouse hotel that lacked for any other décor. To their credit, the mice did not nibble on it at all. Perhaps they saw something in those strong lines that our wedding weekend guests did not. So, after sweeping out the leaves, filling a couple of trash bags, and moving the old wood to a burn pile, I hung the painting in a prominent place—in my well-organized shed. 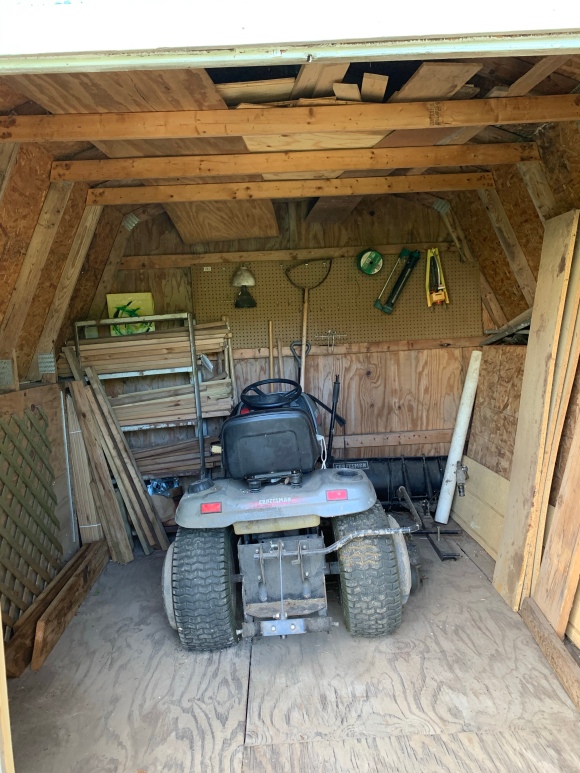 Three years ago 15 of us in a travel group quietly walked through the Garden of Gethsemane located on the Mount of Olives. Some of the oldest olive trees are believed to be nearly 2000 years old. It was powerful to imagine that some of them might have sheltered Jesus when he prayed there on the last night of his life. He anguished over the suffering and death that He knew awaited Him but His prayer focused on the needs of His followers. He prayed for their unity.

So it seemed fitting to see a broken directional sign pointing to the nearby chapel. The arrow was split down the middle but, nonetheless, indicated which direction to go to find the church. Jesus knew, as He knelt in that very place, that His Church would fall prey to divisive human tendencies. We follow similarly vague signs into the Church today and sometimes give unclear signals to others about where to meet Christ.

Some 25 years later Paul offered guidance to the gathered believers in the cosmopolitan city of Corinth. The early church was a mix of those who self-identified as Jews and Gentiles (i.e., non-Jews). The Jews had dietary restrictions that non-Jews didn’t share. No longer Jew or Gentile, Paul reminded them that they were a new group which he called “the church of God.” Their rules were different. “Don’t worry about the rules from your past life. If you go to someone’s home for dinner and they serve you pork chops, enjoy them!” It’s what we teach our children as parents: eat what is put in front of you at your friend’s house! God made everything and everyone so don’t put up obstacles where they aren’t needed. However, ensure that the way you use your freedom doesn’t challenge someone else’s faith. In Paul’s time and in ours today we struggle as a Church to find the balance between the twin principles of freedom and restraint.

We can put on camo and carry loaded machine guns into the state capital to protest restrictions due to COVID. But that may not be beneficial.

Demonstrating because we feel that our rights have been violated is permissible but it may not build up our community that is stressed to the breaking point.

We can re-open our churches or not, depending on what we interpret to be safe timing. We can require masks and social distancing—or not. We can continue to stream our services to keep folks safe at home or open our buildings for the faithful to gather in person. All things are lawful, but not all things are beneficial.

That sounds so helpful but we also know it can cause friction because of different interpretations. Maybe my seminary colleague’s art should be prominently displayed to remind us that the Church has always been in a storm by its very counter-cultural nature. Surely this is, in part, why Jesus prayed for us on the eve of His death.

Paul urges the followers of Jesus in this port city to clear away as many unnecessary obstacles as possible from those who might be easily led away from faith in Jesus. But the one obstacle he insisted should not be removed is the cross. In all our deliberations about how to use our freedom, we Christians must be ready to sacrifice from our own well-being if it builds up our community.

I met recently with a young man who had grown up in a very conservative Christian family. They had clearly defined boundaries for where and how to live life. Now in his mid-twenties and making a living in Seattle, he told me how he was discovering that “non-believers”, those outside the church of his upbringing, were…interesting. They had much to offer! It was a surprise to him that they could inspire him to good actions even though they did not share a belief in Jesus. He told me that he has begun to seek out a broader group of people so that he can listen to them. He now has a love for folks that his parents might have suggested he avoid in his earlier years. He was learning how to use his freedom.

It was a great conversation to have with this young adult. Tribalism is still our easiest inclination. The big world he was now navigating on his own had gifts he had not expected. He began not only to see the beauty in those around him that fell outside of his earlier boundaries. He sought them out. He didn’t impose his Christian belief system on them. He met them where they are, trusting that they would meet the living Christ through his actions. Through open conversations he was able to point others to the One who keeps him anchored in the storms of young adult life.

It seems to me that this is the beginning to peace. We follow the broken sign that, nonetheless, gets us to the Church. When we clean out the dusty, neglected corners to our world, both inside and outside the Church walls, we meet God’s cherished people. We sacrifice for them, choosing to live with discomfort if it helps others. Somehow the storm lifts as we offer them Christ’s peace.