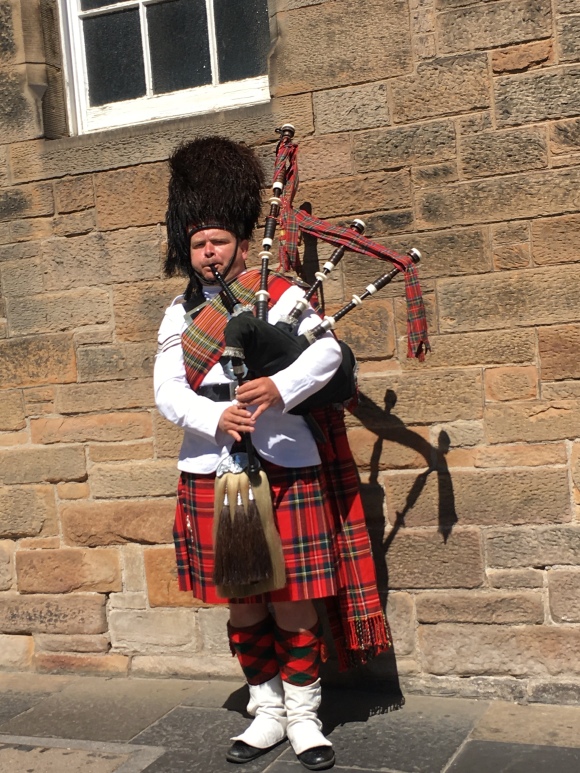 I’m thinking the Queen is on to us. First, she throws her annual Garden Party to honor the good deeds of regular citizens in London the very day we’re at the gates of Buckingham Palace. As we fiercely held our places in the crowd, just hoping to catch a glimpse of the changing of the guard, two soldiers on horses approached the gate. They swung open and a royal procession of horses, police officers and cars with honored guests drove through the mob, into the inner sanctum of the palace yard. The gates swung shut but elevated cell phones continued to capture every move of these poor folks on the other side of the bars. It was only later, by asking folks around us, that we learned the cause for the pomp and jubilation (I don’t get to use that word nearly enough and this is as good a time as any!): a royal Garden Party! Splendid!

Yesterday my sisters and I were happily strolling along the Royal Mile in Ediinburgh (pronounced Edinboro with the end of the word falling off—Edinburra). Again there was a crowd massed around a wrought iron gate peering in with pairs of eyes and cell phone cameras. There were occasional cheers. We didn’t pay too much attention as we were taking in the new digs. The voyeuristic event seemed to end and the crowd dissipated. But after about 10 minutes we heard bagpipes. Truthfully there has been a bagpiper on the streets playing in full Celtic garb every time we’ve been out on the Royal Mile. But this was not the strains from one lone piper. The gates to the courtyard opened and a squadron of bag pipers marched out in unison, their music drawing people in. We soon realized something formal was happening as the musicians were preceded by a battalion of soldiers. They stared straight ahead and moved in sync. Royal Police cleared the way since the street is usually a pedestrian walkway. A couple of cars were led out with grand ceremony as we videotaped the event. Again, we didn’t know what party we had crashed. But, through frantic questioning of those around us, we learned that it was the annual Garden Party for honorable Scottish citizens, just as she had done for our benefit in London the week before! Though we never made it to the other side of the iron gates, she let us get pretty close! Long live the Queen!

Yesterday was our first full day in Edinburgh. In fact, for me it’s first time I’ve been in this country. You guessed it—Scotland claims a part of my roots. Two of my sisters have been here before and say that they feel like these are “their people.” I feel that way in England and my DNA cheek swab confirms this. I am 87% English, 5% Scottish, 5% Scandinavian and 3% something else. We’re anxious for the sisters to get results from a DNA test to see if the Genealogical Soup the six of us share as children of Jim and Katie Chapman has significantly different breakdowns of the same ancestry! Do the two who really relate to the Scots have a higher percentage of Scottish blood flowing through their veins, prompting them to wear plaid and whistle mournful bagpipe tunes like my grandmother did? Does my English make-up predispose me to laugh more heartily at Monty Python jokes? I jolly well think so!

The name that brings us to Scotland to close out this amazing journey is MacDougall. My paternal grandmother was named Katie Florence MacDougall. We have always had floating in our family photo gallery a grainy black and white print of her father, James, wearing a kilt and playing the bagpipe. There are times I have looked closely at that man and marveled that he is my great grandfather. He and his wife, Florence, raised a very musical family, immigrating first to Nova Scotia and then to Massachusetts. My grandmother’s affirmative response was always “Aye”, pronounced “Ayah.” She adopted the Boston speech pattern of dropping the “R” where it clearly is printed (i.e. ”Pahk the cah in Hahvahd yahd”) and adding it where it has no right to be heard (she called her father “Papper“ rather than Papa). We knew she had Scottish roots but really attached her more to Massachusetts than the British Isles. We were kids. It was hard to think beyond our experience.

But finding ourselves inadvertently in a royal parade with a bevy of bagpipers and uniformed RAF soldiers struck me deeply. In that moment as I stood alongside the fanfare with all the marks of a Scottish grand occasion I realized that this was me, to some extent. Once again I was witnessing sights and sounds that were familiar to my ancestors. My sisters shared similar reactions of experiencing uniquely Scottish goosebumps during the ad hoc parade! Our DNA had found a piece of home. 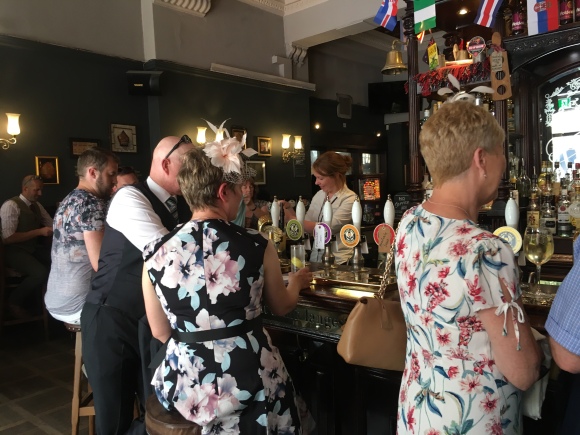 So I don’t have much theological insight about this experience. But I am realizing, as I look at monuments and lavish buildings built by generations of royals to commemorate generations of royal events (like marrying a woman, making her your Queen only to have her beheaded later! Not everything has a pretty ending!), that having a functional monarchy certainly has its advantages. Kings and Queens serve their best interests by showcasing their wealth in some exquisite way for their people and the world. Since their budget is quite lavish and their workforce is relatively unlimited, a bunch of spectacular stuff can be built that lasts for a really long time. Tourists like us get to visit and gawk and take pictures of which Prince did what when and what china pattern was created to commemorate the event. It’s a distinctly un-American political environment and funny that I should be reflecting on it today, July 4, 2018. There has been nothing Fourth of July-ish today, apart from wishing each other joy as American sisters. Instead we’ve witnessed what the beneficence of a faithful Queen toward do-gooder citizens can do to bolster the national joy of her people. Its quite easy to get pulled into the jubilation!
God save the Queen!