While visiting Edinburgh, Scotland this past summer four of us sisters stayed on the Royal Mile while doing our genealogical explorations. Three of us stayed at the Grassmarket Hotel, an area historically named for its past as a marketplace that sold cattle and other goods. It was also the chosen spot for public hangings in the 17th and 18th centuries for early Scots Presbyterians called Covenanters. A pub near our modest hotel was named for a young woman, Maggie Dickson, who was hanged in in the square in 1724. To escape the humiliation of raising an illegitimate child, she killed her newborn infant and was hanged for it. She is remembered, however, because she resuscitated in the wagon when her body was being carted off to be buried! The astounded local officials determined that she had endured her punishment. She had been hanged. They just didn’t expect her to revive! So she was allowed to live out the remainder of her days. She lives on in legend as “half-hangit Maggie” who was regarded with some awe by the townsfolk who grew old alongside of her! A popular area for housing weary travelers like ourselves, Dorothy Wordsworth gave this report of Grassmarket Square in 1791: “Not noisy and tolerably cheap.”

Three of us stayed at the Grassmarket Square with its ignominious history while another sister, the last to sign on for the summer adventure, lined up a lovely room at the local Radisson. We swung by her hotel each morning as mere peasants, looking in on a glorious lobby. The first morning she came out and showed us the “Do Not Disturb” sign provided for use in her room. They used different words to keep the cleaning crew and other unwanted visitors at bay. The door tag says, “Feed My Soul.” The pauper status of the other three of us was confirmed with this Radisson grand expression for “Leave Me Alone!” 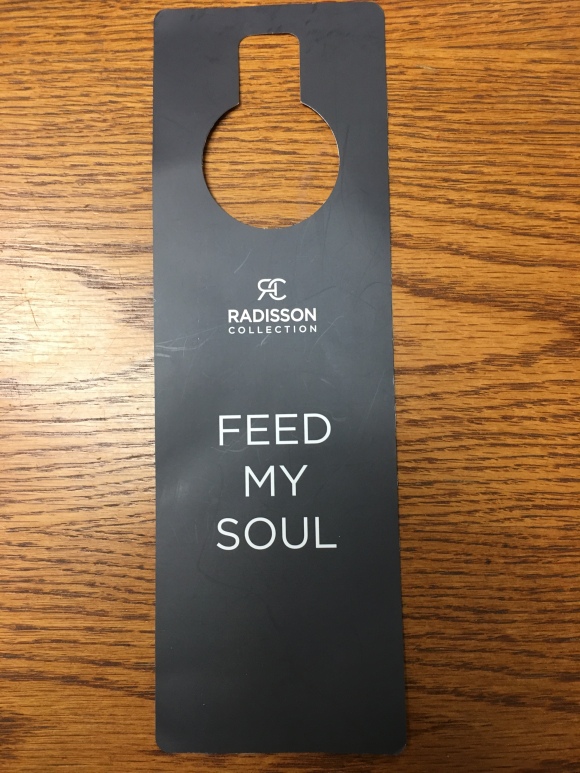 Feed my soul. That just makes me want to sigh! Isn’t that the prayer on our hearts in this busy season of the year? Isn’t that our request of God when the troubles of our world seem overwhelming? What a different message that gives from “Do Not Disturb.” This is often our message of choice: Leave me alone! No solicitation! I’m busy. I’ve got enough on my own plate so don’t bother me to help with your troubles. Do not disturb!

But we will be disturbed in Advent! The lectionary Gospel passage for the first Sunday in Advent is from Luke 21. This is the last chapter in Luke’s gospel where Jesus is still teaching. Chapter 22 begins with Judas’ betrayal and moves quickly into the Last Supper. Jesus wants His disciples to understand that a final time will come when the whole world will be in turmoil. Terror will be the reaction to the events surrounding them and the Son of Man, an Old Testament title Jesus used for Himself, would descend from heaven to mete out justice. Jesus warned against lethargy and drunkenness. He urged His followers to be on high alert, to watch the signs of the times to know when the traditional rhythms to our earthly life were going to be disturbed. In Advent, as we await the birth of the Messiah, we are reminded that we need to be READY for His arrival.

For 2000 years folks have tried to pin down the end of this era. Predictions have been made, communities of believers have camped out in full-readiness mode and those times have come and gone with no ultimate divine intervention. People have had good reason in every  age to think that the end is near based on the descriptions in the Bible: international aggression, natural disasters, solar and lunar eclipses, enmity between people and toward God. We certainly can fill in the blanks with our world today. We grieve over our southern border as tear gas and armed troops are used to stand guard between two countries. Small children and young parents run for protection. We look away from those images but find that we are looking at the next news report of entire towns wiped off the map from fires. Hundreds are unaccounted for and others have tales of terror, trying to escape what they describe as apocalyptic burning. Alaskans pick up from a frightening earthquake. Our military patrol puts their lives on the line by entering into generational hatred in the Middle East. Tensions mount as talks with Russia dissolve. Home-bred terrorism leads us to put safety policies in place at schools and other public places. We now lock our church doors during the week in response to the signs of our times. As Christmas approaches we spend money we don’t have for presents we don’t need all in search of a moment of peace. We don’t want to be disturbed but, in Advent, we will be. Jesus urged His disciples to be watchful and prayerful so that we are ready for what each new day will bring. We may think that our message is “Do not disturb” but our deeper prayer is “Feed my soul.” I beg of you Jesus, feed my soul.

Mary and Joseph watched for the signs of God’s presence. Mary’s illegitimate pregnancy challenged both of them. They could have easily responded to this life-threatening circumstance by telling God, “Do not disturb us! We have a good life ahead of us. We love each other. We love YOU so let’s keep things just as they are.” But they don’t say this. Joseph reacts in an understandable way to the news of Mary’s pregnancy: he plans to quietly divorce her. He could have brought her before the religious authorities and had her stoned to death for infidelity. He was a man of faith and looked for the most peaceful resolution to the dilemma. But God disturbed his sleep and directed him through a dream to marry his fiancée, accepting that this child was of God. Joseph’s soul was fed and he became obedient to God’s will at great cost to himself and to Mary. The tyranny of Roman rule melted away as they held this precious child in their arms when a barn became their delivery room in Bethlehem. The earthly father of Jesus wasn’t given a speaking part in the Bible but we’re still talking about his righteousness today.

I remember a conversation with the father of an autistic girl who was severely handicapped. She was almost 20 but would be forever frozen developmentally at about age three. Her parents felt the need to transition her from living at home to living in a long-term care facility so that she would be well-situated when they were no longer able to care for her. I talked with the dad a week or so before the transition was to happen. He told me that he deeply grieved the change this would bring to his daily routine. “I get up each morning at five so that I can have some coffee and get myself ready for the day. Then I awaken her and get her in the shower. I help her to blow dry her hair and get dressed. We eat breakfast together and then the bus comes to pick her up for school. I love our routine and can’t imagine not seeing her each day.” I was moved by the tender devotion this father showed toward his disabled daughter. Though they had never been able to have a verbal conversation, their love for each other was profound. Some people might have complained that their lives were disrupted by the demands of raising a girl who would never act older than a toddler. But this couple had invited God into their home when she was born and their souls were fed. Like Joseph, they acted in a righteous manner when entrusted with a child with unexpected needs. They watched for God’s presence in this hardship—and she became their blessing!

I wonder what you are watching for as you approach Christmas?  The world into which Jesus was born was violent, secular, divided and suspicious. Some things never change! What are you waiting for in this Advent season? We lit the candle of hope for the first Sunday in Advent. When watching the evening news or having a difficult conversation with a loved one or figuring out where the money will come from for utilities, let alone Christmas gifts, what are you hoping for?

Advent is a time of waiting. It seems interminable to our children to wait for Christmas morning just as nine months can seem interminable to parents who are eagerly awaiting the birth of a baby in their family. We look in on our world and beg God to not disturb us, to let us continue as we are or to shield us from the injustices around us. But, if we keep watch and pray to the God who sent us the Prince of Peace, we will be surprised to discover that our souls are fed! Glory be to the Father! Amen.

2 replies on “Feed My Soul”

Thank you! I really do enjoy reading your posts. Merry Christmas you and your family.

Thanks, Donna! So glad to keep up through FB. Merry Christmas to you and yours as well!