Folks were clutching their rocks, ready to pound a woman brought into public view as an adulteress. It’s scary how quickly a mob can turn on someone. We see that in our world today. I would never run for office, given the vindictive scrutiny that magnifies tiny details from the past. Opponents distort truth to promote their agenda. Crashing the Bible Study, men grabbed rocks while women and children moved to safety. They were anxious to be spectators but not victims of flying stones. They stood at the ready, waiting for the green light from the Temple staff.
In chapter 8 of John’s Gospel, Jesus meets a woman in unlikely circumstances. She’s brought before Him because of a crime: she had committed adultery. This was especially unfortunate given that, in her culture, her punishment could be death by stoning. It’s unthinkable that she is dragged into the Temple courts where Jesus’ Bible Study is interrupted with the mandate of capital punishment. But it’s tragic on another level. The Pharisees, who were the keepers of the Jewish Law, weren’t at all interested in her or her sin. She was a pawn. The Pharisees wanted to bring Jesus down and she became the public example that would test His faithfulness to the Law. It’s a turf war deciding who has jurisdiction over the spiritual development of a people. Jesus is on their turf: the temple grounds. He has a crowd of people hanging on his every word. I imagine the Pharisees having a closed-door meeting with the goal of identifying a legal conundrum that could get Jesus in trouble. It’s dangerous to engage in public service successfully! Status quo advocates surface with their fists up!
The religious elite use language that distances them from the accused. “This woman was caught…Moses commanded to stone such women…” They looked past her to the One they really wanted to stone to death. Jesus didn’t start the fight. They foisted it upon Him. But they underestimated their opponent. They should have known better from other skirmishes. Jesus the Teacher has no projector, no power point, no chalk board. He casually traces letters in the dirt where He has been teaching. But His opponents keep at Him. The woman stands there, heart pounding and thoughts racing. Perhaps she is aware that the man with whom she had the affair is not held accountable. She alone is carrying the guilt. Finally, Jesus stands up. He commands attention. He looks straight into the eyes of these mobsters and throws out a one sentence challenge: “Let anyone among you who is without sin be the first to throw a stone at her.”
Game over. We don’t know whether His challenge was received with complete silence or if they talked among themselves. Did the last to leave stand his ground in self-righteousness before finally giving up? What we read is that they left, one by one, not in a mass movement. Those who first confessed their own sinfulness were the elders. They had lived enough life to know that stones could come flying their way if folks scratched just beneath the surface of their past. “Best to leave before someone distorts facts about my life and broadcasts them to an audience!” Jesus pierces the hatred that was so easily encited in this mob and they disperse after just one challenge in this power play.
Paul wrote a letter to the believers in Galatia. In the first ten verses of chapter 6, he stated that sin happens. Accountability is needed. As brothers and sisters in Christ, we are called to live in holiness together so that the Body of Christ is enriched, not destroyed. He tells this fledging congregation how to proceed if someone among them has sinned. Act with gentleness. That stands in stark contrast to the scene of the woman in John’s gospel. Don’t cast this person out of the congregation. Rather work to restore them but only if you can do this without being tripped up by their sin. Don’t hurl stones at each other. Rather, heap your stones in a wheelbarrow to clear the confessional landscape. Then help the weak person to push her load. Heave that wagon full of sin to the edge of town and drop it off for good. Do it for the person who is unable to do it for himself. The only way you’ll be able to do this is if you confront your own sinfulness. Otherwise, your ego will lead you to pounce on opportunities to bring someone else down with judgmental rhetoric. That’s much easier than doing the more difficult work of restoration! 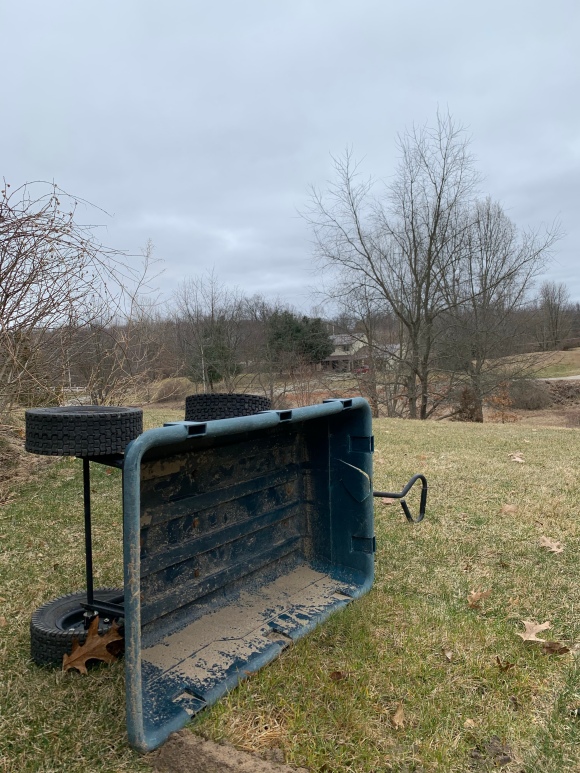 Paul instructs these early Christians to start with themselves. Examine your own actions, the thoughts in your hearts and the words you use. Don’t compare yourselves to others in giving yourself a grade. Look within. Know yourself so that you understand when you have acted to the best of your ability as a disciple of Jesus. When you have done that, no one else’s evaluation of your actions matters. Don’t worry about God being duped into thinking that the schemers are heroes. God is not deceived. God observes how we each sow through our speech and actions and it’s going to boomerang right back at us, good or bad, blessing or curse, depending on what we dish out.
The stakes are high because sin is highly contagious. It only takes one screamer in a crowd to get the whole group riled up with murderous intent. Life has always been hard so we, like this early congregation, are barely keeping it together with the pressures of daily living. Like the corona virus that has spread from one person to another, floated invisibly through cruise ships and airplanes, locker rooms and Wall Street, the sickness of sin sucks the life out of us. The innocent get hurt when we refuse to do the hard work of introspection. If we aren’t willing to admit the ways we carry sin on us, others will get hurt.
In February, a funeral was held in the chapel of a psychiatric ward in Cheongdo, South Korea. Several of the mourners attending the service were infected with the corona virus and they left their germs behind. 111 residents and four nurses were infected. Sin spreads and brings down those who are least able to defend themselves. On morning TV, a world map is increasingly colored in with new and startling statistics about where the plague has shown up. Our world has become a petri dish that is rife with disease. People are desperately trying to distance themselves from each other. As a global community we are suspicious. We are lonesome. We are weary. We are weighed down.

The believers to whom Paul addressed his letter were weighed down. They were pawns in the impressive machinery of the Roman Empire that didn’t hesitate to crush those who stepped out of line. The masses were over-taxed and undervalued. Roughly a third of the population in Paul’s time were slaves. They had no reason to hope that they would ever get out from under the debt they owed their master. They had to content themselves with the crumbs that were thrown their way. But Paul breathed a new mission into this congregation by urging them: “Let us not become weary in doing good, for at the proper time we will reap a harvest if we do not give up. Therefore, as we have opportunity, let us do good to all people, especially to those who belong to the family of believers.” 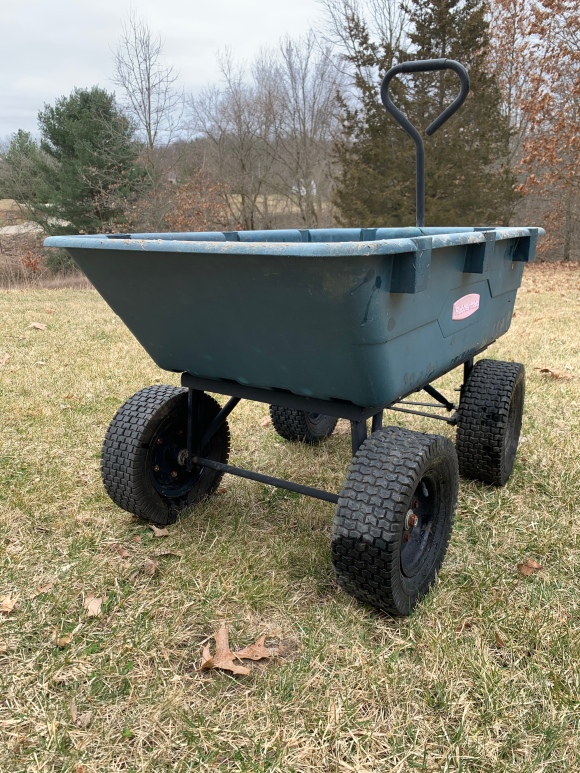 We may be weary but there are folks who need our help. It may feel impossible to push our wheelbarrow of burdens any further but there are people willing to use their strength to assist us. If we don’t waste our energy getting caught up in modern versions of stoning, we will have the strength to carry each other’s burdens. That, as Paul writes, fulfills the law of Christ.

The Pharisees dragged the sinner before Jesus, using her to bring Him down. They didn’t care about her and they certainly didn’t care about Jesus. Sin clouded their vision. If they had done the hard work of looking within and evaluating their own lives through the lens of their faith, they would have fallen before Jesus. With their faces in the very dust where Jesus traced His lesson, they would have confessed their own lengthy list of sins. They were jealous. They were self-righteous. They coveted Jesus’ popularity. They had made gods of their own power and forgotten the One they were called to serve. They most certainly had learned to turn a blind eye to the suffering of their neighbor and victimized the innocent to promote their own political campaign. But Jesus unmasked their sin. I wonder what they talked about at their dinner tables that night? Did they confess the shame they felt for being exposed as one who breeds contempt for a living? Did they get honest with their God? Or did they push the shame down deep and return to business as usual the next day?

At the end of the encounter just Jesus and the trembling woman are left. Even the people in the Bible Study are so shaken that they flee. Just Jesus is left alone with a woman who is still standing, stones strewn about. There are no words that give us a hint of her emotions. It almost sounds like a calm conversation that wraps up the story but we know it could not have been. “Woman, where are they? Has no one condemned you?” Her eyes are wide with terror, having faced her own mortality. She responds, “No one, sir.” Jesus is merciful but He is still a teacher. He is still a priest. “Neither do I condemn you. Go your way, and from now on do not sin again.”

The rules stand. She had sinned. Jesus holds her accountable for her guilt but He understands the penitence she feels in her heart after this near-death experience. Jesus knows that she, like all of us, is in process, struggling to live a holy life in a brutish world. Jesus forgives her but exhorts her to change her ways. She picks her way through the heavy rocks that were never hurled. She goes home. The burdens she had carried with her were left at the feet of her Confessor. She has journeyed from death to life. She is weighed down no more. Hallelujah!

(Artwork by Noel Skiba. Painted in our worship service in June, 2015)  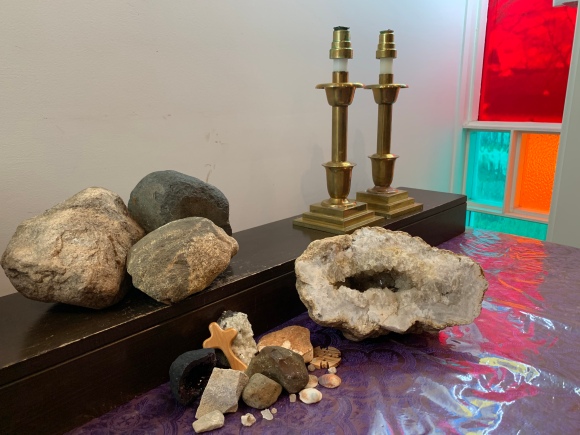